A follow-up to last year’s critically acclaimed and highly successful JIM FORD album ‘Sounds Of Our Time.’ Now 15 previously unreleased songs together with the ultra- rare late ’60s promo-only single, Look Again. For the first time ever, the original version of Bobby Womack’s Harry Hippie, as well as other undiscovered classics like I’ll Be Ahead If I Can Quit While I’m Behind and Point Of No Return. Contains previously unpublished photos personally supplied by Jim Ford.

‘Point Of No Return’ is the second Bear Family release and features rare tapes culled from Jim Ford’s north California mobile home. This time the focus is on recordings made during the early seventies that never saw light-of-day. In 1972 Bobby Womack scored a smash with Jim Ford‘s song, Harry Hippie, but until now the original has been gathering dust in an old leather bag on Jim Ford’s floor. That only leads you to fantasise about the success that songs like If You Can Get Away or Point Of No Return might have had if they’d been released. I’ll Be Ahead If I Can Quit While I’m Behind stems from mythic sessions held at London’s Olympic Studios in 1971. This CD is essential to all the country soul lovers who made last year’s ‘Sounds Of Our Time’ into a smash.
(Barcode: 4000127169938) 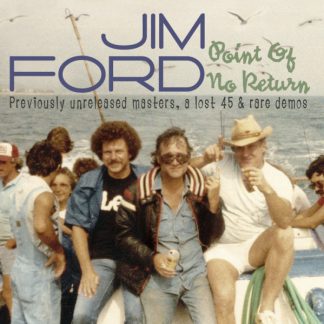