Under the alias of Zanov we find the works of French electronic pioneer Pierre Salkazanov, who had started playing guitar in the 1960s in a Shadows styled band, Les Ambassadors. Instrumental rock was not enough for Salkazanov, he was always looking for evolution, so when a meeting with French synth player Serge Ramses (of “Secret” fame) got him into the world of synthesizers he just dived deep into the bourgeoning world of electronic music. He got himself his first syths and started producing works into a 4-track Teac tape machine. French music was at its best, it was the time of Jean Michel Jarre, Didier Bocquet, Richard Pinhas and Heldon, Alain Meunier… even Gong‘s Tim Blake was living in France at that time.

And so Zanov soon caught the attention of Polydor, who released “Green Ray” in 1976. It is a work made with minimal equipment if compared to other French sythetists, not to mention their German peers, he worked on the EMS VCS3 synth and used a 4-track Teac and a Revox A77 Mk IV reel to reel tape recorders obtaining huge sound results. You can appreciate an influence from the Berlin school, Green Ray walks the same path of what artists like Tangerine Dream and the likes were producing at the time, Zanov had felt under the spell of Ricochet, but his head was boiling with ideas which gave the recordings a very personal, unique touch.

Zanov‘s three albums met with unanimous critical acclaim for the sound quality as well as for the originality of this very personal universe. We offer the first ever vinyl reissue of Zanov’s “Green Ray” under license from Pierre Salkazanov himself and with his cooperation, in a limited edition of 500 copies that reproduce its original artwork, come with remastered sound and an 8 page insert with liner notes and photos courtesy of www.audionautas.com plus one bonus 7″ with previously unreleased on vinyl format material. 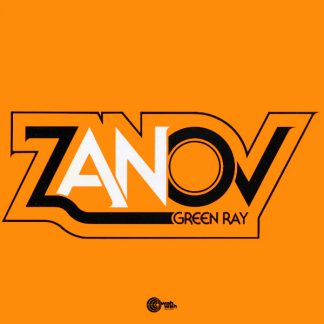