WHITE BUFFALO, THE – Love And The Death Of Damnation (Limited edition BLACK LP) (2016)

Available to European customers only.
The album comes in a deluxe digipak sleeve, and will contain 3 previously unavailable bonus tracks. Meet The White Buffalo, project of earthy, Oregon-born and Southern California-raised singer/songwriter Jake Smith, whose music is finally getting the attention it deserves, thanks in part to a number of his tracks being used in the hit show, “Sons of Anarchy”. Following on from his first ever UK show earlier this year, in which he played to a sold out crowd after it had already been upgraded to a larger venue, his 4th album, “Love And The Death Of Damnation”, will be given a full European release on Earache Records.

With influences as diverse as Waylon Jennings, The Descendants, Tom Waits and Bad Religion, Smith flits effortlessly between grace and grit, but wanders to both sides of the spectrum in heart-crushing extremes. As Billboard Magazine describes, “His voice is Eddie Vedder with more Jameson; his attitude is Johnny Cash with more empathy.”

Whether Smith’s using his unparalleled ability whisk you away to a world of drunken dropouts or  his Emmy-nominated song-writing skills to produce a bold anthem of love, his unique, bourbon-soaked voice strips down his stories into raw emotion, capturing his audience by making every situation feel personally relevant. Writer Jeffrey Fleishman explains, “It’s the voice that burrows into you. Devil’s growl. Sinner’s lament. Smith’s baritone echoes with villains and misfits, drunks and philistines. It curls through loneliness, sets out on crooked highways. It is an American voice cured in recession, war and betrayal, a resonant map where the spectral bleeds into dreams. But in it, like mica in slate, is the glint of redemption, flashing just long enough to allow a man to keep a bead on whatever goodness might dwell in him.”

Currently he’s in the middle of releasing a 10-part docuseries with leading guitar manufacturer Ernie Ball called “Capturing The White Buffalo: The Recording of an American Songwriter”. The series documents the making of Love And The Death Of Damnation in a alluring and cinematic way. It captures the raw struggles and successes of Smith’s writing and recording process, gives each song a new narrative, and introduces you to the album in a way that’s altogether haunting, uplifting, and unforgettable. 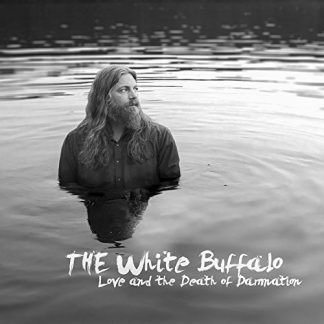