Kosár “BANNED FROM UTOPIA – So you don’t like modern” a kosárba helyezve.
Akció!

1992 after having released 3 solo albums guitarist Lars Eric Mattsson decided it was time for a change. The singer of his 2 first albums, Tosse Jansson had left the band as Lars was recording his 1991 album which the all instrumental ‘Electric Voodoo’. However this was not the way Lars wanted to continue making music, and a mutual friend and concert organiser suggested Lars should contact Conny Lind, a Swedish singer who had just returned from Los Angeles after a short period in Alex Masi‘s band MASI as well as having recorded with Sweden’s Talk of the Town. In stepped also longtime Partners of Lars : Tony Mattsson – drums and Micke Ahlskog – bass.

It did not take long before VISION were recording their first album and several record companies wanted to sign them. A worldwide deal was signed with Apollon Inc/FEMS of Japan. In Europe VISION was released by Roadrunner. The album did well in Japan and 3 videos were made. However it didn’t take long before problems took over. Since melodic hard rock was really dead in USA the album was never released there despite an agreement with Atlantic. Apollon who had invested a lot of money in the band were suddenly very sceptic about VISION. First a mini live CD was recorded but never released, and then the follow up to the debut album was recorded which also never was released, Apollon wanted to wait but all the problems made VISION split up

In 1996 Lars tried to re-unite the band but Conny Lind was then busy with several other projects like Amaze Me and Randolph Reymers did the vocals on 1997’s VISION album ‘Till the End of Time’, however this was just a studio project and also this time business related problems were very apparent. The 1992 VISION album, was re-released by Lion Music in 1998 with 2 added bonus tracks off the 1993 session. In the year of 2000 VISION released a 17 track collection, ‘The best of Vision’ which contained 5 previously unreleased tracks and at that time we thought we had seen the end of the band. However in 2003 singer extraordinaire John Jeff Touch stepped in and brought new life to a collection of songs that had been composed for Vision’s second album that was never released. 5 of these songs were written and recorded in 1993 but never released while the other 5 were composed and demoed in 1997. The music that ended up on ‘On the Edge’ is a collection of recordings made between 1997 and 2004. Discography: Lars Eric Mattsson’s VISION (+2 bonus tracks) LM C9821 2 Vision – Till the End of Time LMC 9701 2 Vision – The Best Of LMC 2008 2 Vision – On the Edge (2004). 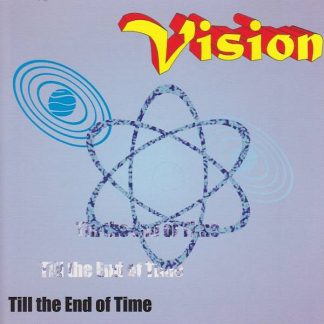