It has been forty years since the release of “Oi – The Album”. Four decades of laughter, defiance and working class rebellion. To celebrate its ruby anniversary, Garry Bushell – who put together that very first Oi compilation in 1980 – has teamed up with Pirates Press Records to present this superb new album: Oi! 40 Years Untamed. This hard-hitting collection features exclusive, unheard songs from the Oi pioneers, and original tracks from younger, up-and coming bands from around the world. Oi was a form of raw working class punk that developed in England as a reaction against the dilution of punk’s original ethics and energy.

The mainstream media never understood Oi. How could they? The Oi bands and fans came from places they didn’t want to go. As early as 1977, street punks were disillusioned with rip-off Kings Road boutiques and the fact that many punk heroes were living a lie. The Cockney Rejects and the Angelic Upstarts were the start of something new, raw and authentic.

This New Punk percolated in backstreets, on football terraces and on building sites, in classrooms, pubs, tattoo parlours and police cells. Its songs were about workers’ rights, football hooliganism, police oppression and unemployment with a side order of beer and pilchards. The Oi bands did not hate bands like the Clash and Gen X. But they had an authenticity that the punk pioneers could only dream of. Consequently the Oi sound was harder, the choruses bigger, the anger more real. Oi was of the streets, from the streets and for the streets….which is why it has touched a nerve all over the globe, inspiring scenes everywhere from Europe to Indonesia, via Australia, Japan, Russia, Canada, Switzerland and the USA. 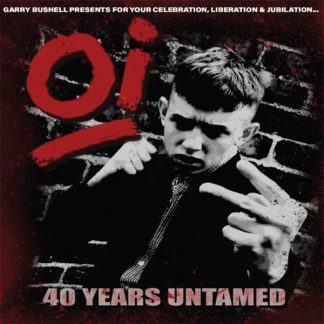