Heptown Records from Sweden release Troublemakers anniversary album “30”.
While musical trends have come and vanished, Troublemakers have stuck with their straightforward rock ‘n roll punk and Swedish lyrics. With roots in the early Swedish punk era, they have survived themselves and numerous of Swedish government ministers. Troublemaker’s trademark has always been integrity, joy and energy. Last year, 2010, they were winners in the category of best Swedish Punk / Hardcore band on the Manifest Awards in Stockholm for their latest CD “Made in Sweden”. LOK and Hardcore Superstar have made a cover of their song “Staden Göteborg”.

Seven full length albums, numerous singles and participation on various compilations have made Troublemakers to one of Sweden’s most important punk bands. They’ve conquered five capital cities and have done more than 350 gigs around Sweden and in six European countries. In the year 2011 Troublemakers will celebrate 30 years as a band. It will be celebrated with an anniversary CD single week 14 (on Ran Records, available only at gigs, websites) and a compilation album released on HepTown Records. The collection CD contains 30 tracks, including a new song ”30” and 29 old tracks. The album will be out on the streets May 6 2011.
(Barcode: 7350010770534) 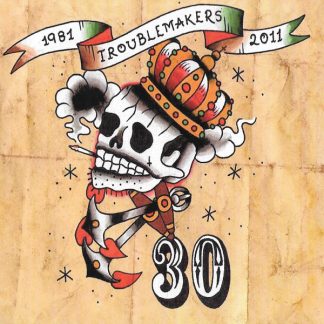