The Hard Rock band MIKE TRAMP (Denmark – WHITE LION singer) will release their new album ‘Stray From The Flock’ (CD) on March 01, 2019 via MIGHTY Music. Mike Tramp has spent a significant portion of the last twenty years studiously carving out a solid solo career for himself as a singer/songwriter. Having long turned his back on the temptation to dwell on former arena-filling glories and extremely comfortable with his chosen path, it matters not to the Dane these days, whether he’s playing a small café in some far flung town in France or a large outdoor Summer festival in his native Denmark. Mike Tramp is happy being Mike Tramp.

2013’s “Cobblestone Street” began a run of albums that has subsequently included “Museum” (2014), “Nomad” (2015) and “Maybe Tomorrow” (2017) that have been consistent in their look, feel and a sound that although centres on some of the finest, acoustic based yet hauntingly melodic songs you’ll ever hear also – refreshingly so – make the odd diversion into previously unexplored territory. In the case of “Museum” that just happened to be a fantastic slice of funk rock in the brilliantly rendered “Down South”.

Mike’s new album, “Stray From The Flock”, essentially takes that “Cobblestone Street” template one step further.
It’s also an album that pretty much wrote itself. “I picked up the guitar and the songs just started flying out of me. I thought ‘fuck! There’s an album that wants to come out of here!’”, Tramp laughs. Mike will, of course, be touring in support of “Stray From The Flock”, but as with his previous solo excursions there won’t be any explosions, moving drum risers or confetti bombs on stage. There will just be a guy standing in the middle being the real deal. That guy is Mike Tramp. 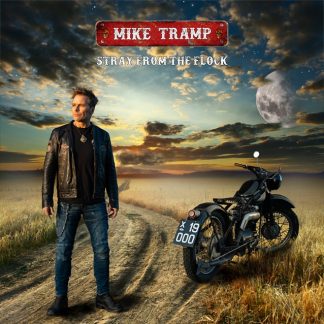