3MS Music are delighted to announce the release of ‘Get Hip’ from Albie Donnelly’s Supercharge on 18th January 2019 [Cat No 3MS013CD]. The album is described by the band as “Dynamite Rhythm & Blues” and features Molly Duncan from Average White Band and guest vocalist Tommy Blaize from the Strictly Come Dancing Band.

There’s an unashamedly retro feel to ‘Get Hip’, which features a collection of covers chosen because they are quality classics that have stood the test of time and happen to sound amazing when given the full-on Supercharge treatment. Albie Donnelly has been performing live for forty years and he knows how to pick a set of songs that are both fun and accessible; ‘Get Hip’ proves that and then some. As he says, “These songs are the real deal, we’re not talking about creating art or making a profound statement, these are great songs that swing and make people smile.”

Albie Donnelly was a founder member of Supercharge in 1974 and forty four years later he is still handling lead vocals and tenor sax duties for what has always been one of the most revered live acts on the circuit.   Veterans of iconic music venues like the Marquee Club and the Nashville Rooms, Supercharge were signed by Richard Branson at Virgin, and even opened for Queen at their 1976 Hyde Park Festival. ‘Get Hip’ is just the latest chapter in the Supercharge story and is set to win them yet more fans, crack a few grins and get people moving – and surely the Strictly Come Dancing connection can’t hurt there!
(Barcode: 0634158724046) 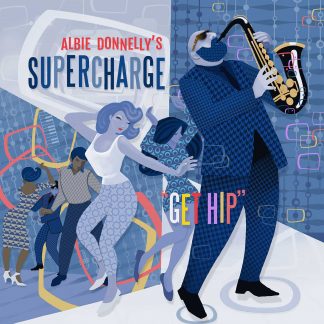