***500 PIECE VERSION***
Released on 28th August 2001, “Iowa” is the second studio album by the American heavy metal band Slipknot.  The title derives from the band’s home state, Iowa, which members have stated is one of their greatest sources of inspiration.  The album was a major success, premiering in the top tens of nine countries.  It has since been certified Platinum in the UK, the US and Canada.  In 2009, “Iowa” was rated third in Kerrang!’s ‘The 50 Best Albums of the 21st century’ reader poll.  In 2017, Rolling Stone magazine included “Iowa” on their list of ‘The 100 Greatest Metal Albums of All Time’. The album was originally released in a foil sleeve and to celebrate the album’s twenty year anniversary, this has been faithfully recreated on this, the first foil effect 500 piece Rock Saw. 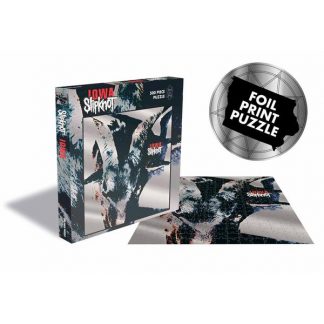