3MS Music are delighted to announce that Sharks return with a new studio album “Ready Set Go” [3MS016CD / 3MS016LP / 3MS016DA] which is to be released 29th June 2018. The thirteen-track album will be preceded by a single, ‘That Girl’.  Listening to “Ready Set Go” is like taking a thrilling journey into an alternate timeline.

You might say that Sharks have gone Power Pop but then you could also say that they’ve gone Folk Rock or Blue Eyed Soul. The founder members who set supergroup Sharks up with the late Andy Fraser of Free, guitar genius Chris Spedding and vocalist Steve ‘Snips’ Parsons, have been making fine music together since 1973.  They have effortlessly absorbed every dynamic musical trend from neo-rockabilly through punk via Tamla Motown, glam rock, classic film scores, processed dance music and beyond.  It’s all there on “Ready Set Go”. Spedding and ‘Snips’ are joined by Nick Judd on keys, Gene Clark on drums and Tosh Ogawa on bass. 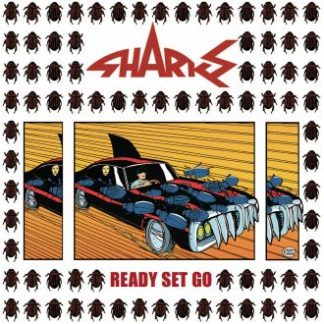