In a dismal time period characterized by increasing lawlessness amongst corrupt politicians and an out of control power elite, more Americans’ rights seem to be ripped from our Constitution with every coming day. As if the tense political climate wasn’t enough, we deal with gentrification transforming local culture into one giant strip mall, a skyrocketing number of people thrown out on the streets, the current global pandemonia, and impending martial law sending racial tensions flaring as civil unrest implodes on a global scale. Meanwhile, this apocalyptic agenda unfolds before the zombified masses who are too subdued in a comfortable state of technological paralysis to read the writing on the wall…

Out of this whirlwind of disaster comes four like-minded veterans of the hardcore scene inspired by a time period that makes the Reagan era look timid in comparison. The band is driven by a shared feeling of social responsibility and an obligation to produce music with a true sense of urgency. In a world seized up in a virtual purgatory, actions speak louder than words. As a band, we would like to believe songs speak louder than both. 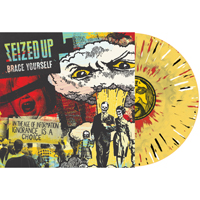