Released on the legendary label ‘Brain’, Günter Schickert‘s debut “Samtvogel” (1975) was one of the most significant guitar albums of the Krautrock era. Points of comparison from today’s perspective are Syd Barrett or Pink Floyd‘s more adventurous early recordings. Schickert’s follow-up “Überfällig” of 1980 was released on the equally legendary ‘Sky’ label. Once again a milestone recording, it showcased Schickert‘s hypnotic echo guitar which developed into one of the hallmarks of the Krautrock sound.

Schickert‘s new album “Nachtfalter”, translating as ‘moth’ in English, carries on from these beginnings, making it hard to believe that he has in the meantime reached pension age. Recorded during the scorching hot summer of 2018, “Nachtfalter” shows the pioneer of the echo guitar sound his very best. Here Schickert was assisted by Andreas Spechtl (‘Ja, Panik’) who recorded the album and played the drums. They form a truly winning team: Spechtl selected the best moments of Schickert‘s guitar tracks, mixed them while also supplying some own loops. 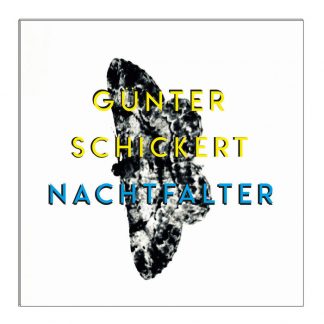