The tenth installment of Fat Wreck’s Live in a Dive series takes us back over 30 years to Eindhoven, Holland. The date is May 12, 1989, not too long before Montecito, CA punks RKL will call it quits (for the first time, anyway). The 17- song set – a good chunk of which is culled from 1987’s album “Rock ’n Roll Nightmare” – was recorded at famed Eindhoven squat-turned-venue De Effenaar, and is beautifully ragged and raw. Although the band would get back together, things were never quite the same after the members went their separate ways the first time. As such, this record is a document of one of the last points before everything took a dive, of a band holding it together – incredibly well, it has to be said – before everything unraveled. And even though you can’t really hear that tension, when compared to the Double Live in Berlin live album, recorded the year before this one, there does seem to be an extra sense of urgency in these songs.

They’re more primal and more ferocious, more intense and more nihilistic. Above all, though, they still sound fun as hell. RKL’s “Live in a Dive” album – which features incredible art by longtime RKL cover artist Dan Sites – isn’t just a pure representation of the band in all its twisted, untamed glory. It’s not just the sound of a band about to fall off the cliff edge. It also serves as a bittersweet tribute to both Manzullo and Sears, who died in 2005 and 2006 respectively. These songs capture both members in their element – onstage, doing what they love, surrounded by people who love what they do. Just listen to the frantic run-through of “Break the Camel’s Back”, the guttural desperation of “Hangover”, the nervous energy of “Blocked Out”, the blistering frenzy of “Rock N Roll Nightmare”. It’s one of the last times – and certainly the last time caught on tape – that the band would sound this imperfectly perfect, this happily carefree. “Live in a Dive” is an integral piece to any RKL fan’s collection. 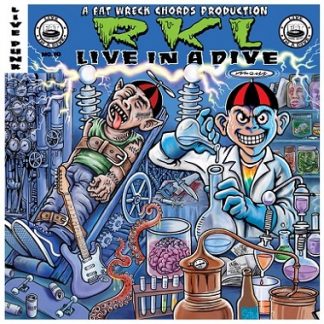