Book two of the trilogy arrives in all of its bloody horror!
“Centuries before our world belonged to the damned, ATHENA PETROVA – vampire knight of Transylvania – fought and fed.  It is the early 15th century and Athena struggles to defend her ancestral home from the predations of the Ottoman Empire. When she learns that House Petrova has struck a fateful pact with the Church of Rome, the pagan vampire commits the ultimate blasphemy. Desperate to save her land and driven by demons of her own, Athena forges a living weapon with which she will rout the enemies of Transylvania (Hungary).  But this is a weapon that cares for nothing but blood and butchery, and Athena may realise too late that she has started a fire that may consume both herself and the world.

SIGNUM DRACONIS is the eagerly awaited second instalment of REALM OF THE DAMNED, the bestselling graphic novel series that is taking the black metal underground by storm. This epic medieval prequel tears into the series’ bloody history, unleashing bizarre new monsters and yet more guest appearances from legends of the metal scene.  From baleful forests to demon-ravaged battlefields, REALM OF THE DAMNED: SIGNUM DRACONIS is a hallucinatory saga of bared blades and barbarism! Savage, atmospheric and doom-laden, it’s a fever dream of black metal and gothic horror that will leave you as breathless as the dead.”
(Barcode: 9780993415821) 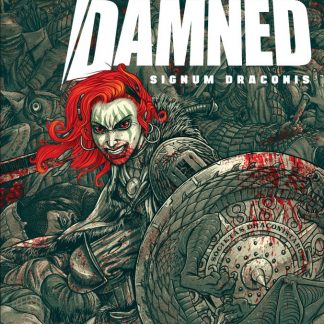