Nico‘s Last Concert: Fata Morgana is a CD/DVD set live album documenting Nico’s performance at a show called Fata Morgana – Wüstenklänge im Planetarium (Fata Morgana – Desert Sounds in the Planetarium), held on June 6, 1988 in West Berlin as part of the European Capital of Culture festival that year.
The concert (organized by musician Lütz Ulbrich) took place at the planetarium of the Wilhelm-Foerster-Sternwarte and consists of remixes and documentary footage including rare new material. Except for the album’s closing song (which was previously released on The End…), Nico and her backing band the Faction composed all the pieces specifically for the show, during which they were accompanied by optical effects and Moon-themed projected pictures and films. As the title of the album indicates, the concert was Nico’s last, and the material on the album is among the last she (co-)wrote. Six weeks later, on July 18, she died while on vacation in Ibiza. 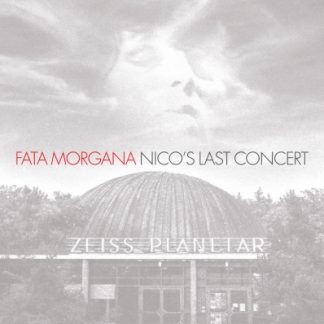