This special Collectors Item is the newest release from Mos Generator.
Mos Generator is the brainchild of multi‐instrumentalist and producer Tony Reed. Having remained a steady presence in the rock n’ roll underground for many years. Mos Generator formed during the winter of 2000 in Port Orchard, Washington from the ashes of a ten year off & on collaboration between its three members, all of which are long time veterans of road & studio. The need to strip down to the basics of hard rock was apparent from the start and continues to be the foundation for all the bands recent material. In Good tradition of Hüsker Dü MOS GENERATOR turned their Hit ‘Diana’ in a new garment. To complete this H42 Records Limited Edition Release there is a another new song called ‘Flower & Song and two ‘old’ songs witch were originally released 2015 on a special Bonus Tape (ltd. 75 copies).

All Vinyl came with an exclusive silkscreened B‐side (black vinyl with white silkscreen) “Flower & Song” and “Diane” are previously unreleased. Slow/Moody and Early Mourning (live) originally released on (Bonus)Tape only in 2015 by H42 Records.
“t’s as pure an example of heavy rock as I’ve heard.” – JJ Koczan – The Obelisk 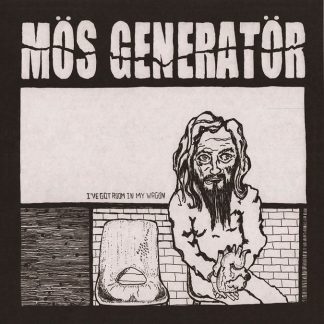