CLASSIC FESTIVAL APPEARANCE BY LOWE, EDMUNDS & ROCKPILE IN 1980.
This newly discovered radio broadcast recording presents one of the early afternoon highlights of the festival, Rockpile. The invigorating sound of Rockpile was based on the strengths of Lowe and Edmunds, who shared a love of late 1950s/early 1960s pop and rock & roll, but who had distinctively different approaches. Edmunds was clearly a retro-rocker, obsessed with the sound of Sun Studios and Phil Spector. Lowe, on the other hand, preferred things loose and ragged and was primarily interested in capturing raw energy and passion. It is this approach that connected Lowe to the punk and new wave scene in England.

As a producer, Lowe emphasized grit and passion and effectively translated it in the studio for a litany of angry British musicians, including Elvis Costello, the Damned, Graham Parker & the Rumour, and the Pretenders. The allure of Rockpile (and the various solo projects recorded by Rockpile) was the unique balance achieved between the two approaches. The set the band played at Heatwave was voted the performance of the day in many quarters, and as this new CD illustrates, it remains a historic artefact in this dynamic group’s short but magnificent tenure. 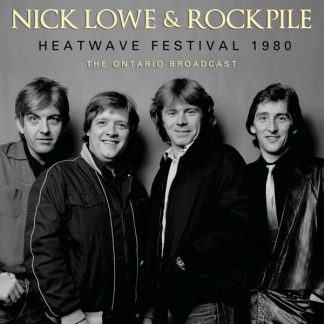