DYING VICTIMS PRODUCTIONS is proud to present ICE WAR‘s highly anticipated second album, “Manifest Destiny”.
A longtime veteran of the metal and punk undergrounds, ICE WAR is the work of the ultra-prolific Jo Capitalicide. The band had its roots in 2011, under the moniker Iron Dogs, who released two cult albums on DYING VICTIMS PRODUCTIONS, before changing the moniker to ICE WAR for its debut 7″ EP in 2015, “Battle Zone”. Now flying solo, Capitalicide quickly set to work and released three more EPs over the next year and a half, and further refined his vision of a genuinely ancient heavy metal attack. 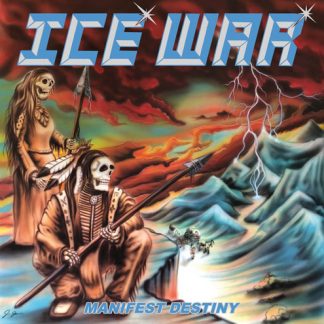