At long last, the third volume has arrived with alternative mixes/takes of all tracks featured, with the exception of the rare live tracks. Over the past three years John McCoy has supplied from his vast tape archive the best selling Gillan Tapes series which have achieved considerable sales around the world to the legions of Gillan fans.

Volume 3 is a scorcher and includes the very rare eight and a half minute “live” studio version of “Smoke On The Water” which is eagerly sought after by fans having never before been released on CD (this was the B side to the 45 “Vengeance”) plus numerous other rarities.

The first 5000 pressings of this release will be individually numbered as a Limited Edition and also include a free 10 track CD called “For Gillan Fans Only” which, whilst it was given away in vinyl form initially, has never before been released in CD format. 27 tracks, 2 CDs, remastered, all for the price of a single CD.

Felvételek :
CD 1.:
Running White Face City Boy
Trouble
Sunbeam
I’ll Rip Your Spine Out
If You Believe Me –
Long Gone
You’re Sisters On My List
Fiji (no17)
Born To Kill(live)
M.A.D. (live)
Ballad Of the Lucitania Express
The Trilogy
Unchain Your Brain (live)
No Laughing In Heaven (live)
So Low
The Festivals Of Spirit
Smoke On The Water
Excerpt From The Confidente Opera 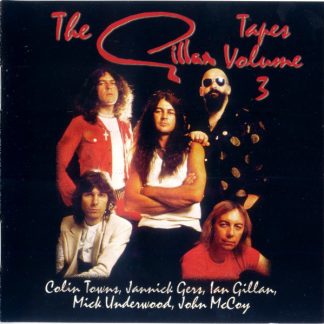