Triggered pretty much concurrently in the UK and US, before spreading rapidly to most other parts of the western world, the 1960s counterculture – an anti-establishment cultural phenomenon that existed between the early 1960s and the beginning of the 1970s – took as its main impulse music, drugs and politics. And if one man epitomised its spirit like no other, that man was Jerry Garcia. Garcia had been mixing with scenesters and insiders since the early part of the decade – indeed he met Grateful Dead cohort Phil Lesh at a party held at Ken Kesey‘s house in ’62 – and he began using LSD in 1964. By this time too Jerry was playing guitar and banjo in a jug band, which by 1965 had morphed into The Warlocks, also featuring Phil Lesh on bass guitar and Bill Kreutzmann on drums, as well as Pigpen, who’d played with Garcia since his jug band days.

The Warlocks became the Grateful Dead soon thereafter, and while the rest may be history, it’s also one hell of a story which this 2 x DVD set attempts to tell, in parallel with the story of the counterculture. The scene had its spiritual home in San Francisco, and its spiritual spokesmen, among whom Jerry Garcia was one such, and a most effective and respected, albeit unacknowledged, representative he turned out to be. Featuring classic archive footage, interviews old and new, and contributions from the likes of Garcia, Lesh, Kesey, Bob Weir, Paul Kantner, Bill Graham and numerous others, all of which together forge an enticing and revealing documentary film set, about what was going down during the build up to the Summer of Love and beyond.
(Barcode: 0823564547091) 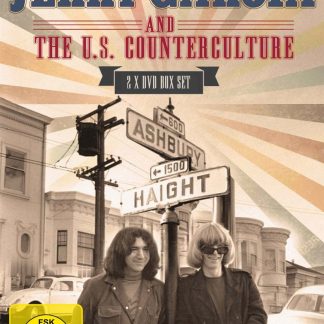