After RROBIN and Rhino, Galant Records keeps on exploring the huge areas of beat making, in plunging into hip-hop with the previously unseen duo Kuna Maze and Vax1, forming Galant Troopers.
Even though french media laugh at defining french rap as “the new pop”, in Galant Records we prefer to keep on observing this constantly moving genre and give these artists the opportunity to show their differences. Far from being an Ouroboros (which is an ancient symbol representing the snake biting its tail), the rap borrows new forms and, such as Sangoku as the anime series go by, it keeps on surprising. Just as with new voices as with new beatmakers, you attend a plurality of sub-gender into hip-hop.
For the first volume of this multifaceted project, we invited the main producer of L’Or du Commun: Vax1, along with Kuna Maze, the author of the mind-blowing album “2009” that came out last year at Cascade Records. As the real driving force for the lyricists, Galant Troopers has dug far beyond the explored areas to find its MC.

Galant Troopers allies two talented beatmakers : Kuna Maze, “one of the French headline act regarding future beat” (Indiemusic) and Vax-1, also beatmaker of L’Or du Commun; whom they “clearly picked up the place, thanks to one beatmaker who realised the whole productions” with (Ninkymag). The two artists are accompanied with several MC, such as Blu Samu “as at home with singing as with rap” according to Liberation, Nelson Dialect who “replaces Australia on the worldwide map of Hip Hop” (RollingStone), and the talented Jay MNG, Double A and Black Josh. 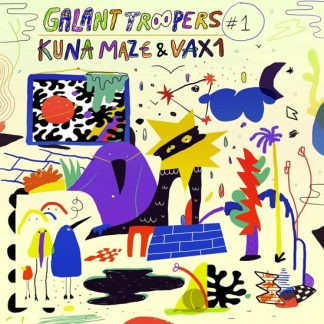