SUPERB DOUBLE DVD SET DETAILING THE FULL CAREER OF DAVE GROHL & FOO FIGHTERS.
Quite incredibly, it s now been a quarter of a century since Dave Grohl – following the untimely death of his Nirvana cohort Kurt Cobain – began what was originally a solo-project, called Foo Fighters. Prior to the release of Foo Fighters’ 1995 eponymous debut album – which featured Grohl as the only official member – he recruited bassist Nate Mendel and drummer William Goldsmith, both formerly of Sunny Day Real Estate, as well as Nirvana touring guitarist Pat Smear, to complete the line-up. The band began with performances in Portland, Oregon. Goldsmith quit during the recording of the group’s second album, The Colour and the Shape (1997), when most of the drum parts were re-recorded by Grohl himself. Smear’s departure followed soon afterward, though he would appear as a guest with the band frequently starting in 2006, and would re-join as an official full-time member in 2011.

Since then members have come and gone across the period of the band s existence with only Grohl and Mendel still on-board from those early line-ups. But over this period Foo Fighters have become one of the world s premier rock bands, now spoken of alongside Pink Floyd, Led Zeppelin, U2 and Metallica. This Double DVD collection tells the story of Dave Grohl – from his early career, before joining Nirvana, right up to the time when Foo Fighters were at the top of their game – and includes rare footage and interviews with band members and others who knew the group at the time. Featuring too a full documentary detailing the Foo s rise to fame and numerous other features as well. Presented elegantly in full colour double slipcase with extra features too, this new release is an ideal opportunity for fans to get the full lowdown on this extraordinary band s career.
(Barcode: 0823564550183) 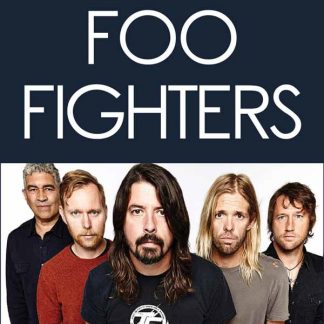