Guitarist Fahey was certainly unique, a creative force who spent most of his musical ‘career’ in a seemingly endless, and timeless, meditation on the primitive folk process: deconstructing the sounds and techniques of early country blues and synthesising them into his very own distinctive guitar style (complete with very audible string slides, hammer-ons, chokes and pull-offs). For this Volume 2 of The Best Of John Fahey, music has been selected from the period 1964 to 1983 and the choice confirms his importance in American acoustic music. Twilight on Prince George’s Avenue, Sligo Mud and Tuff are three tunes from his long-lost, unreleased Takoma album “Azalea City Memories”.

(Versions of the first and third of these tunes appeared on his 90s albums “Old Girlfriends And Other Horrible Memories” and “The Epiphany Of Glenn Jones”, respectively.) There is also as a long work from 1966, ‘The Fahey Sampler’, originally included on the Takoma sampler “Contemporary Guitar” (Takoma 1006) but rare and unheard for many years. Dance Of Death is a rightly a classic and comes from “The Dance Of Death And Other Plantation Favorites” (Takoma 1004): the bluesy, raga-like Orinda-Moraga is from 1965’s “The Transfiguration Of Blind Joe Death” (Takoma 7015). The guitar rivalry/wishful thinking of The Assassination of Stefan Grossman comes from 1975’s “Old Fashioned Love” (Takoma 1043): The Approaching of the Disco Void and Steamboat Gwine ‘Round De Bend are both from 1981’s “Live In Tasmania” (Takoma 7089). Hark The Herald Angels Sing/O Come All Ye Faithful are quirky 1968 readings of these carols included in “The New Possibility” (Takoma 1020). Frisco Leaving Birmingham is from 1983’s “Railroad 1” (Takoma 7102): On the Beach at Waikiki goes back to 1967’s “Death Chants, Breakdowns and Military Waltzes” (Takoma 1003) Ann Arbor/ Death by Reputation is drawn from 1979’s “Visits Washington D.C.” (Takoma 7069): closing out is the sublime guitar hymn Let All Mortal Flesh Keep Silence, taken from 1980’s “Yes! Jesus Love Me” (Takoma 7085).
(Barcode: 0029667001625) 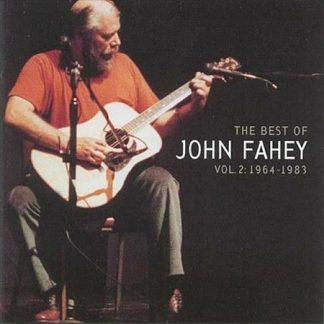