At a point in time when Britain was still coming to terms with a new era in its racial make-up, pop groups remained largely white although heavily influenced by black music. Homegrown multiracial groups would emerge with The Foundations and Hot Chocolate, but The Equals provided the blueprint and enjoyed considerable success in the process. Their various appearances for the BBC from 1968 to 1970 display alternate renditions of album cuts and singles (with exclusive tracks), capturing the band midway through recording their six albums up until 1970, coupled with TV appearances and tours at home and abroad.

Although this collection doesn’t sum up the depth of their work, which remains one of the most considerable in terms of size, it does offer a glimpse into their halcyon period when as a pioneering, multiracial rock group crossing social and music boundaries, the Equals were indeed, unequalled! London Calling proudly presents The Equals, live from the BBC, London, England from 1968-1970, all 22 tracks performed live on Top Of The Pops. Professionally remastered original broadcasts with 12 page booklet featuring background liners and archival memorabilia. 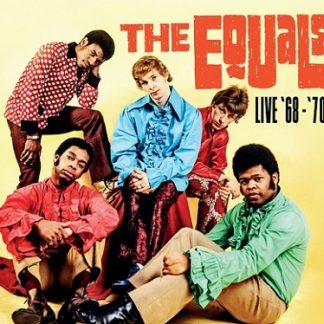