Quebec city Occult Metal band DOOM’S DAY is back with its 3rd album for PRC MUSIC entitled “The Whore”. Ever since the the debut album came out, DOOM’S DAY went on his own path without ever sacrificing the basis of its sound. DOOM’S DAY in 2017 is still highly influenced by MERCYFUL FATE, GHOST and DANZIG, is still taking elements from classic DOOM and is still mixing it with pure evil from classic 1980’s era VENOM… but everything about this new album is superior to the previous one, as much as “Evil eyes” was compared to “The Unholy”. The music shows a much more mature band, DOOM’s vocals are at its bloody best, the whole production is absolutely crushing and the band, as a whole, is performing like a full time touring band. Every album was special but we can’t emphasis enough on the quality displayed at every level on this spectacular new release, this is the DOOM’S DAY record you were all waiting for.
(Barcode: 0643157440000) 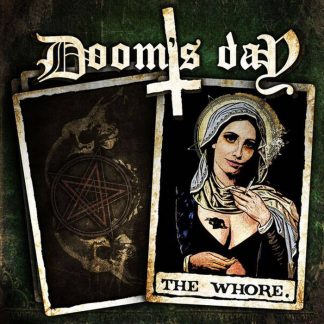