The first album, “THE UNHOLY”, was well received last year, with great reviews and numerous interviews in underground publications worldwide, praising DOOM’S DAY for getting out of the usual patterns and over beaten paths. Album number two, “THE DEVIL’S EYES”, is a much more focused and better produced recording but musically speaking its a giant leap forward! The band is still churning out its own brand of wicked occult heavy metal, still highly influenced by MERCYFUL FATE and GHOST, but overall, DOOM’S DAY 2014 is a much more aggressive band, showcasing a much stronger musicianship and bigger, more expensive arrangements. They basically pushed their own limits to new levels of greatness! “THE DEVIL’S EYES” is a masterpiece of modern HEAVY METAL and DOOM’S DAY is currently one of the greatest bands to look for in Canada!
(Barcode:  0643157428596) 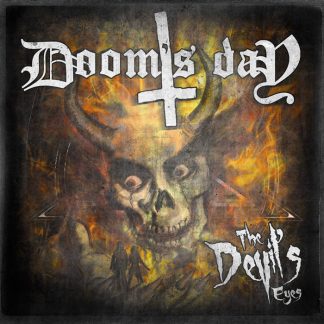