He is now active as producer, director, and scriptwriter in Hollywood and in 2021 his new movie Get Lucky will premiere. After the well-received release of 4-vinyl box set “I LOVE DEAD PEOPLE” (2018), one of Sweden’s most ambitious and craziest record projects ever, Deep Torkel is back with his old scandal sleaze rock band Suzie Beats Them All, a “super group” founded in 1988 with original members from acts like The Leather Nun, Cortex, The Tanks, Man Klan and Johnny Thunders band.

Suzie Beats Them All has a history of chaos and scandals. They were booked for a big tour 1990-91 but only played three gigs under their own name. After gigs at the Underground rock club and Hultsfred Festival they were forbidden by the police to play because of sexual acts on stage and disorderly behaviour (sex, blood and violence). Suzie was headlining Swedish national news and was slammed by the religious and political correct authorities. The remaining tour was cancelled but Suzie played a few gigs under other names.

Three decades later Deep Torkel decided it was time for a big comeback with his Suzie Beats Them All. In the vain of his all-time favourite record “The Stooges’ Raw Power”, the album “Drugs Party Pussy & Pain” was recorded, printed, and set for release already in 2017. But Torkel’s busy missions in crazy Tinseltown Hollywood messed up the plans for more than two years and in 2020 another delay occurred. The band were booked as headline act at the re-opening of Undergrund rock club (the very same venue that were closed down in 1991 mainly because of Suzie’s infamous gig) when the covid-19 pandemic killed the comeback plans.

From the first look at the cover till the last tune echoes out in your damage eardrums, it is pure raw power, true rock ’n’ roll in its shittiest way that assembles Stooges with early Alice Cooper, Blue Oyster Cult and early Guns & Roses. All references aside, it doesn’t sound like anything else. Deep Torkel‘s roaring screams and the live feel of the band creates a fat, dirty unity of something completely raw, rough and real. 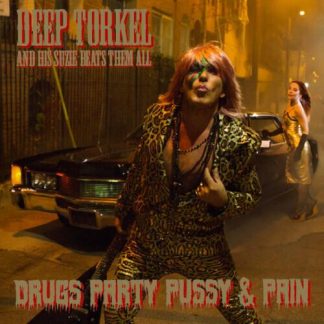