DAVID COURTNEY (alias: David Alexander Cohen) has, through a long and successful career, achieved that elusive
smash hit record that many generations of songwriters strive to achieve. HIT songs such as “One Man Band”,
” The Show Must Go On”, “Giving It All Away” to name a few

By 1975 he took time out to pursue his solo career, releasing his debut album “First Day” which caused a few
ripples in the UK but charted in the USA. Seeking to maintain the momentum of that success he travelled to
Honky Chateau Studios, France (where the studio had attracted David Bowie to Elton John to Pink Floyd to
Cat Stevens) and assembled an amazing cast of musicians (who collectively performed as ARGENT) and
recorded “Midsummer Madness” and on returning to the UK the album was mixed by legendary Beatles
engineer Geoff Emmerick. David on playback was not comfortable it was the right album to follow “First
Day” and he took the difficult decision to mothball it. With hindsight he had produced a classic Prog Rock
album which is now released for the first time 35 years later.

The bonus album “Shooting Star” was recorded in 1980 when David was living at 3361 Cold Water Canyon,
Los Angeles a property later made famous by Eddie Van Halen (who bought the house from David) and
renamed it 5051 studios. David and Mike Love from The Beach Boys became friends and Mike wanted to
take David’s new album “Shooting Star” and turn it exclusively into the new Beach Boys album. David’s
response “No”! Once again he put the album “back in the box” but 33 years later it now sees the light of day. 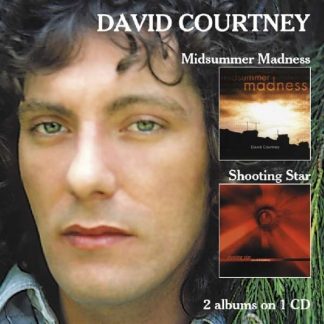