Compilation of demos 1-5 (demos 3-5 make up the debut album “Mondfinsternis”), as well as the previously unreleased song “Die Leere”. 10 Jahre Brocken Moon, as the name implies, is neither a new album, nor a best of for that matter, but includes all Brocken Moon releases prior to “Das Märchen vom Schnee” as well as the previously unreleased new song “Die Leere”.

The success of their latest album created considerable demand for the previous releases, one and all limited and out of print since years. Hence, we agreed to the band’s idea to make them all available again as double CD with almost 100 min playing time, sold for a reduced price. Thus, fans will find the entire “Mondfinsternis” album (itself consisting of demos 3, 4 & 5) on CD 1 and on CD 2 their debut demo “Pain”, the 2nd demo “Schattenlicht des Mondes” + the never before released song “Die Leere”.

Those of you who are not familiar with the band’s first two demos should be made aware of the fact that the material is rough, unpolished and pure underground Black Metal. It’s not for ninnies and fans of crystal clear studio sound had better keep their distance from the raw underground filth and hatred that is early Brocken Moon! Almost 100 minutes of pure, unpolished, hypnotic black metal spanning 1999 to 2005. All material has been out of print for years.
(Barcode: 4250088500497) 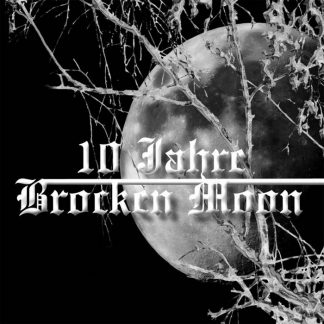