Although more notorious for his outrageous stage antics than for his music, GG Allin recorded prolifically, not only in the punk rock genre, but also in spoken word, country, and more traditional-style rock. His extremely politically incorrect lyrics, which often covered subjects such as misogyny, pedophilia, blasphemy and racism, polarized listeners and created varied opinions of him within the highly politicized punk community.

“The following DVD includes shows and offstage footage of the infamous “Terror in America” 1993 tour. These are some of GG’s final shows before his untimely death. See for yourself why this tour will forever be known as the bloodiest and most violent tour in rock & roll history.” – Merle Allin 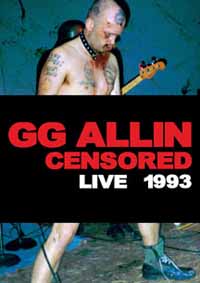