Felvételek :
DVD 1.:
1. AC/DC: And Then There Was Rock (Life Before Brian)
Focusing on the band’s early incarnations, including the period before the inimitable Bon Scott fronted the band, and right through Bon’s tenure, up to his tragic death in early 1980.

DVD 2.:
2. AC/DC Highway to Hell – A Classic Album Under Review
Featuring a further documentary connected to Scott’s era with AC/DC, this time looking at the period during which the band recorded, released and toured the record which, as it sadly turned out, was to be the final full album to feature Bon Scott, the highly regarded Highway To Hell.

DVD 3.:
3. AC/DC – Back In Black – A Classic Album Under Review
The final film in this set looks at AC/DC’s most successful album of all time, the mighty Back In Black. Featuring the first vocal contributions from then-new-boy Brian Johnson, this program explores the history, circumstances, recording, release and aftermath of this extraordinary album.
(Barcode: 0823564549491) 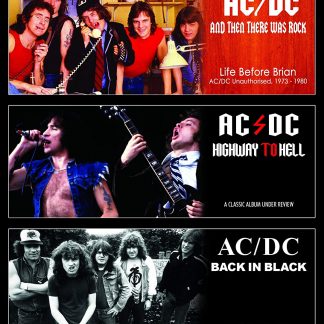